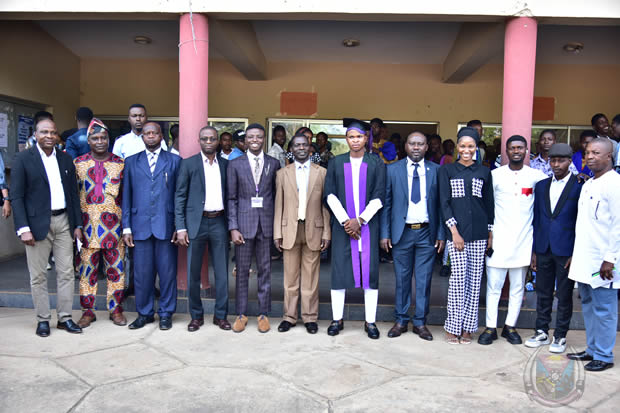 The Vice Chancellor, Federal University of Technology Akure, FUTA Professor Adenike Oladiji  has charged the newly elected Students Union leaders of the Institution to always exhibit the values of the university as captured in the mission statement. She stated this during the inauguration of the new leaders of the Union on Tuesday 20th December, 2022. Professor Oladiji who was represented by the Deputy Vice Chancellor, Academic, Professor Rufus Ogun semi, said exhibiting the qualities will ensure effective execution of the tasks of their offices as well as excellent completion of their studies.

She told them that the task of leading students towards achieving the best has just begun urging them to set about their duties immediately to achieve their set goals. Professor Oladiji stressed the need for the new executive to embrace dialogue in all their engagements rather than taking to any form of activity than can disrupt the academic calendar. She assured the newly elected executive that the University Management will provide them all opportunities for rational conversation and deliberations. She commended the outgoing FUTASU executive led by Abiodun Ibiyemi for maintaining peace on campus during their tenure. The Vice Chancellor also praised   the student affairs division for conducting a free and fair election.

The Dean of Student Affairs, Professor David Oke ,said the induction of the newly elected students’ union leaders has been one of the most important traditions not only for the students and their union but also the University as a whole. He said the new leaders have been given an excellent opportunity to adequately showcase the purpose and objectives of the union. Professor Oke tasked those who did not win during the election to team up with their colleagues to take the Union to greater heights. He also charged the newly elected student union leaders that they are steward to those who elected them and also to the university. He added “I want you to know that success can be measured based on already set goals and objectives. It will therefore be wise for you to set your goals early and work at achieving them."

Admonishing the students on the need for peaceful coexistence, he said that students’ unionism is dynamic, so the era of using violence to settle perceived grievances with Management or any other body/group was over. He added that" I want you to learn the wise saying of Mahatma Gandhi: “An eye for an eye will only make the whole world blind". The Dean said   modern day Unionism thrives more on consultation than confrontation.

Speaking on behalf of his colleagues, the President of FUTASU, Jesunifemi Asoore expressed his gratitude to the entire students’ body for entrusting them with thE important role promising not to disappoint them. He also pledged to forge a harmonious relationship with the University management   to make the university a better place for all students. He said as the newly elected president, he would  ensure that the administration is “characterized by service; service to everyone who has given to them the mandate to be leaders at this time.” He also promised to ensure that the new administration would be an effective and representative voice of all students in the university. "I understand that being a student can be challenging at times, and I want to make sure that we are there to support and advocate for you." Asoore added that he will work closely with the university management and other stakeholders to address the issues that matter to and concern  students.